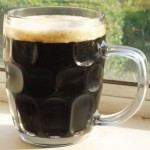 While I was in Australia, three friends and I met most weekends to brew beer. We did so for about 2 years from August 2009 and I have to say I think we weren’t bad at it! I have been heard to say that Australia has horrible beer. This isn’t true – some of the beer brewed there is brilliant. Unfortunately, like almost anywhere in the world, a lot of the mainstream beers are not good.

We progressed from extract brews to all grain brewing, including having a home-modified fridge to lager beer at constant temperatures.

For more information on the beers we brewed, some photos, and the recipes/notes we made – check out our online brewing notebook at http://brew.cavaye.com! This notebook is no longer being used as I have moved on to an offline program for the design of my beers. It is left up here for reference and posterity.

Having moved back to the UK I have started brewing again. It’s not quite as fun on your own, but it’s still good

Two years ago I also began growing my own hops and have managed to harvest enough for one tiny prototype brew. More to come!